I forgot that Peter Stoeveken wanted to play in the Club Championships, although he is unavailable for the first two weeks. The B grade will now have 11 players - here is the revised fixture list


Posted by Wellingtonchess at 15:26 No comments:


Posted by Wellingtonchess at 02:19 No comments:

The blitz title was held in the upstairs analysis room, as we lost our usual spacious surroundings because of earthquake damage. I was worried it would be cramped, but actually we managed to get all the players in quite comfortably. 28 people took part (up from 24 last year), including Karthik's 6 year old brother Pramodh - surely the youngest player ever in a Wellington Chess Club tournament? - and new member Australian Efrain Tionko, resident in Wellington for the next year.

I was co-defending Blitz champion, along with Michael Nyberg and Brian Nijman. However, as soon as I saw Russell Dive and Anthony Ker walk through the door, I suspected that defending this title would be problematic! Scott Wastney was also there, but the New Zealand champion does not tend to perform so well at the fastest time controls. 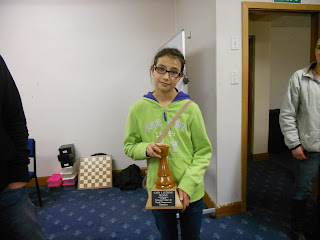 Arguably the sensation of the night was Layla's defeat of Scott in the preliminaries. After all, how many times has a reigning New Zealand champion been beaten by a 12 year old girl in any form of the game? Admittedly, Layla is not just any old 12 year old girl, but the brand new NZ junior (under 20) rapid champion, and NZ schoolgirl champion!

However it was Russell Dive who took the honours, adding the Blitz title to the Rapid title he won last week. The only person who beat him all evening was Alan Aldridge. 3 players qualified for the final from each of the 2 preliminary groups, and Russell saw off all the opposition there. Congratulations Russell! - back to his good old scary form.

Here are the results:

Posted by Wellingtonchess at 06:09 No comments:


Russell won his last two games, winning the club rapid title with an impressive 8 out of 8 with 2 byes. Anthony came in a point and a half behind, and behind him Alan and Ross outperformed, with 6.5 out of 10. Special mention to Rama Rao Miriyala, who missed a couple of weeks, but scored 5 out of the 6 games he played.

That's it for now - blitz next week, and the Club Championship starts the week after that on 1st August. Let me know if you want to take part, if you haven't already done so.

Posted by Wellingtonchess at 16:01 No comments:

The Julian Mazur Memorial has started - 8 round Swiss, 1 game per night, 75 minutes plus 30 seconds per move